Sweet Pea had her ENT (Ear, Nose Throat doctor) appointment on Thursday and we got some bad news and some good news.  Let's start with the bad...Sweet Pea has to go in for another set of ear tubes because the ones that were installed in March are finally out.  She has a little fluid in both ears, but no infections.  The surgery should happen by the end of October.  So that was the bad news and it really wasn't all that bad since we were told that her tubes might only last 3 months when they were first put in and it has been 7 months!

The good side of her ear tubes needing to be replaced is that until the new tubes go in we get to enjoy bubble baths and swimming without fear of water getting in her ears!  That may not sound like a big deal to many of you, but since we have been completely unable to find ear plugs that will stay in this little girl, it has really made life a bit more complicated.

That last statement makes me realize that we have two pieces of good news to share from the ENT.  I had spoken with him a few weeks ago when I thought Sweet Pea might have an ear infection and asked him if he knew where I could get Sweet Pea fitted for a pair of Doc's Proplugs.   A fellow mommy in our local DS support group had told me that they were the only thing that had worked for her daughter and I really wanted to give them a try.  The problem was that when I went to their website and submitted a request for who had the sizing kit, all I got back were a ton of surf shops.  I wasn't going to trust my daughters hearing and ears to a teenager working in a surf shop!  That led me to ask our ENT and he said he actually had a sizing kit and he would bring it with him to her next appointment.  I called the day before to remind him as I REALLY wanted these plugs and he was able to fit her into the extra small size.  They might be slightly bigger than she needs, but the smaller size (called tiny) was going to be just a little too small.  Since her ears are growing, we both decided to give the extra small a chance.  I couldn't believe it when he put them in!  They seem like they will be quite easy to use and the best part...drum roll please...they might actually stay IN her ears!  I'll do a full review when we actually get them which I assume will be at the tubes surgery since we don't need them until then.

To celebrate the occasion, here is a collage of her first bubble bath!  18 months old and the girl finally got to play in her very own bubble bath!  Hopefully the plugs will work as she had a blast and I want to do this a lot more.  We will certainly be doing it a ton until her surgery just in case the plugs don't work! 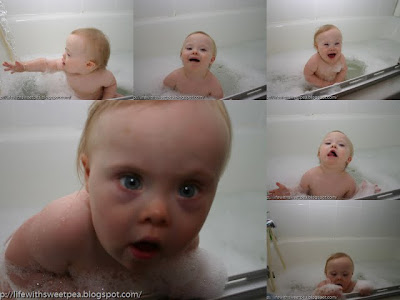