Today went great!  Thank you everyone for the positive thoughts because they worked!!!!  Sweet Pea got the ear tubes put in and had the EGD performed!  The anesthesiologist was wonderful!  He met with us and he listened to her lungs and confirmed that they were clear and so even though she has this wet cough, he said he would still give it a try.  The plan was to try the mask and see how she started reacting.  If it wasn't going smoothly or she started coughing to pull the plug.  If things were going smoothly then he would proceed with putting a breathing tube in which was needed for the EGD.  The priority was to get the ear tubes in and if the EGD was able to happen great, but if not, we were fine with that too.  We were thrilled that he was on the same page!  Some anesthesiologists wouldn't have even attempted it and with her being sick so regularly he understood our desire to want to try.  Yippee!!!

The ENT was only able to put the smallest ear tubes in so it is likely that we will have to repeat the procedure in about 4 months, but it could be more or less.  We will have to wait and see.  He said there was a lot of fluid in both ears that he suctioned out.  He thinks she should be able to hear a lot better now so we can hope that her speak can start picking up!  That is our hope!

The GI gave us pictures from the EGD and although the esophagus and stomach are a bit irritated, it isn't bad by any stretch.  That makes us all feel better.  He wants us to continue with the Prevacid which is no surprise at all.  Oh, and the best news of all...regarding the artery that is pushing in on the esophagus...it doesn't look like it will cause an issue with solid foods!  It doesn't push in very much and he doesn't see it throbbing which he said was a good thing.  I can't believe that I almost forgot to share that piece of great news!

Here are some pictures from the day.  She was such a good patient!  She had a much easier time coming out from under the anesthesia this time.  Probably because she was only under for about an hour as compared to three hours last time.  She had blood drawn before the procedure and she was really good for that.  The labs showed her white blood count was a little low so they gave her some antibiotics while she was under, but I don't really know what having a low white blood count means.  I will be asking her pediatrician about that at the one year checkup. 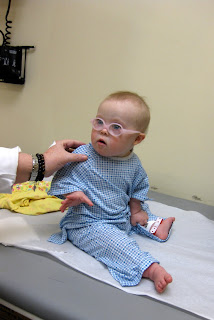 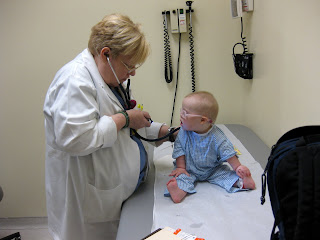 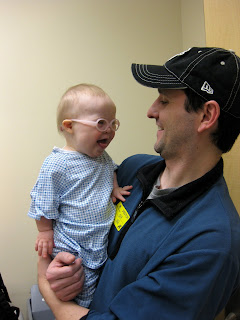 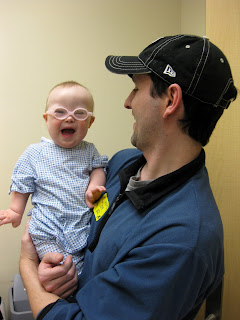 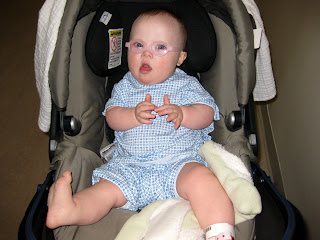 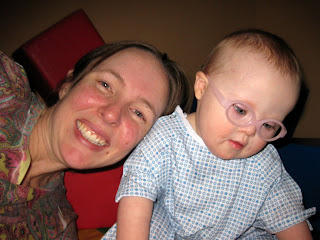 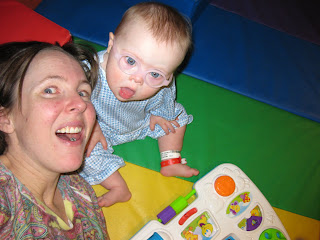 Post Procedure snuggle time (do I look happy or what!?!?!): 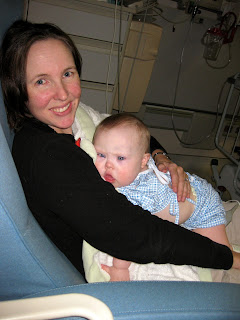 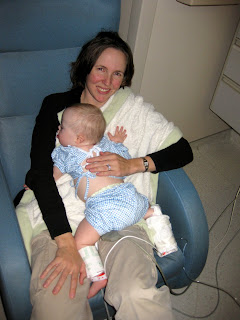 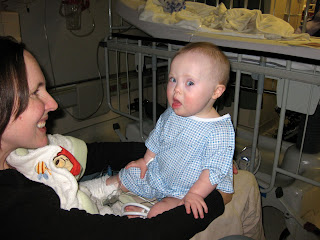 I love the looks that Sweet Pea gives sometimes.  She is certainly a character and she had all the nurses and doctors wrapped around her little finger very quickly.  We are so proud of how great she did during the whole thing and are just thrilled that we were able to get them both done today!
Posted by Sweet Pea's Mommy at 2:33 PM