Here is what she is doing by her 1st birthday:

Weight: 17lbs 1oz - Lighter than at the 10 month check up, but doctors aren't worried about her.  She has been sick so much the past two months that they hope she will start gaining weight if/when she gets healthy for more than a few days.

Foods: Not much changed from last month...Eats lots of puffs, carrots, sweet potatoes, peas, green beans, chicken, turkey, ham, pears,  pear juice, some bananas, chicken noodle, chicken vegetable, cereal and teething biscuits.  Typically (when healthy) 4 bottles and 2 boobs a day with 3 of the bottles being formula plus 3 meals of food.

Favorite toy: Real phones...just waiting until her drool kills one of them

Favorite song: tie between the Wheels on the Bus and the Grand Duke of York

Accomplishments: combat crawling!!!!  She doesn't do it much yet, but she is doing it with her arms finally and I think she will do it more now that she knows she can.  This really started on Sunday so we are so excited!  She also now drinks many meals from a munchkin straw cup, improving on her use of "more" and starting to do a modified "all done" (one hand in the air and often with the bib in it trying to rip it off), loves to play with paper and tissue and napkins and won't immediately put them in her mouth so we can actually let her play with them, eating puffs well but still without a pincer grip, knows how to pull her left arm out of the car seat strap when it's time to come out, initiates peek a boo and holds the cloths up herself (her feet "dance" when she is excited and it's so cute to watch them when the rest of her is hidden) and she will turn pages when reading books.  Successful ear tube surgery and EGD!  Survival of a 107.8 degree fever and parents that were worried sick!

Works in Progress: moving from stomach to sitting (almost has it but normally requires a little help still), two lower teeth are trying to come in...one on each side of her existing two bottom teeth, "giving five" and blowing kisses

Sweet Pea-isms: Still enjoys moms chin as a teething toy and it hurts more than it used to now that she has two real teeth.  It's still too cute to make her stop though.  Mommy will wear a chin bruise as a badge of love. Pants like a dog when she gets excited.

Sounds: Still tons of da and ba and the tongue is not out nearly as far as it used to be.  She also seems to be attempting to mimic our words (all done is the main one).  Loves to put her hands in and on our faces when we are talking or singing.

Facial Expressions: Sucks her lower lip into her mouth (mommy loves this one), puckers up (if only when we were trying to teach her to give kisses)

Sleep: Bedtime is between 7 and 7:30pm.  We are waking her up for a twilight feed before we go to bed but otherwise she sleeps until 5:30 or 6am at the earliest.  Often she will be awake but entertain herself in her crib while her mommy and daddy sleep a little later.  She has a very bad habit of sleeping in on the days that mommy and daddy need to be somewhere early so that they can't take advantage of it.  It's quite cruel, but funny none the less.

It's been a busy month and I'm sure I have forgotten a few things, but hopefully I captured most of them.

We loved spending her first birthday with friends during the day and family in the evening.  She had a great time!  Here are some pictures, but more will be coming as time permits... 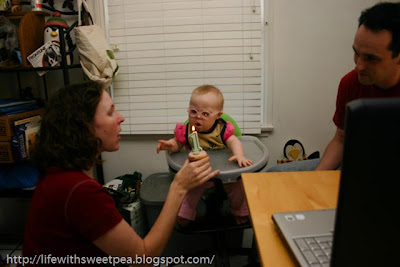 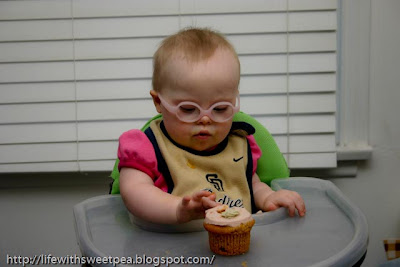 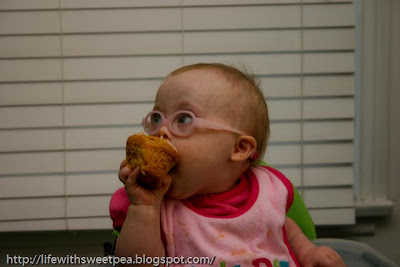 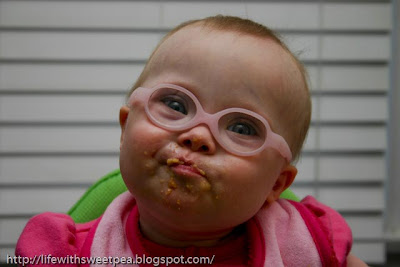 Sweet Pea got her very own Rody!!!! Thanks Grandma and Grandpa! 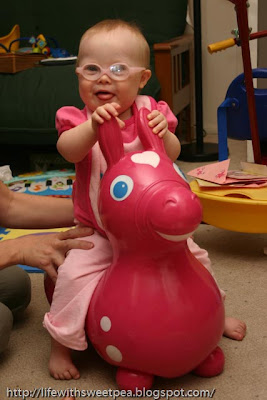 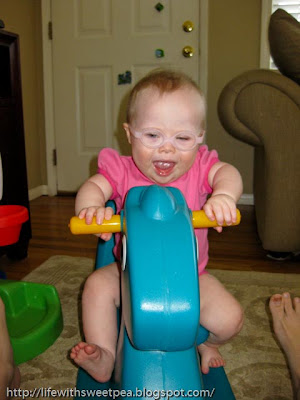