Update from our appointments

Today was a long day and I'm so glad that my mom was there with me to help me get through it.  Sitting in waiting rooms and exam rooms from 8:30 until 1pm!  Sweet Pea was a trooper through it all and was quite adorable at times. 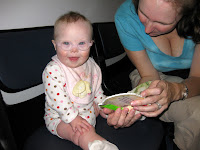 I'm hoping this video works...my first time doing this so let me know how it goes...

On to the serious stuff...here is the rundown...we met with the GI first, but you will see why I've switched them around here...

ENT: Still has fluid in both ears and so ear tubes are going to happen.  The doc is a bit concerned about getting the tubes in where they need to be.  The way I understand it is the DS made her ears smaller and the drum is at a slight angle so it makes it hard (if not impossible) to get the tubes in the perfect spot.  This means that there is a fair chance that the tubes will have to be put back in every 3-4 months.  We hope that isn't the case, but won't know until we try it.  We are scheduling the surgery and hope to have it happen in the next 2-3 weeks, but things haven't moved that quickly at this hospital in the past so I'm not holding my breath.

GI: Need to have more tests run.  Reflux isn't under control...duh...but could be caused by slow emptying of the stomach.  They were going to do a gastric emptying scan (also called a reflux scan) where she drinks some radioactive liquid and they take pictures of her every minute for an hour.  The hope is that 40% of the drink empties from the stomach by the end of that hour.  The ENT asked if the GI wanted to do an EGD while she was sedated.  So, we went back to the GI after the ENT and left a message asking what he wanted to do.  I received a call an hour later saying that doing the EGD instead of the emptying scan was a good idea.  He doesn't normally suggest the EGD first because of the sedation required, but if she is already being sedated, he thinks it is a good thing to do.

We will be proceeding with both just as soon as they can get them scheduled.  It's good that we get to kill two birds with one stone, but boy did I wish we didn't have to do either.

That brings us to the final bit of news for the day...the GI did read to us a portion of the MRI results...the indentation is being caused by an aberrant right subclavian artery.  He didn't want to give us the actual report, but he did read us a portion and now we just have to wait a week until we meet with the cardiologist.  It's good that they found something, but it's also bad that they found something.  We are hoping that it is something that they can just keep an eye on, but we will know more next Friday.

Let's end on a high note...To reward her for being so good all day I took her to the park around the corner from the house and she played on the new swings.  If you remember a couple of weeks ago I mentioned that they had redone the park by our house and installed a swing set.  I was disappointed that they didn't put any baby swings in, but I figured I could just swing with her on the regular swings.  Well, they put in a baby swing now!  There are 2 regular swings, 1 baby and 1 toddler.  It's great!  Sweet Pea had a blast and we will be going there a lot now.  I'm so excited!  The simple things...we definitely need to enjoy the simple things...I just keep trying to remind myself of that!
Posted by Sweet Pea's Mommy at 8:38 PM