Ok guys, this is getting ridiculous...10 months has now officially become huge for us!  Sweet Pea spent a great deal of the day cooped up in a doctors office (minor scare at a routine pre-op appointment when her O2 saturation levels were anywhere from 88 - 94...more on that in a second) and apparently that pissed her off enough to bust out a new skill...combat crawling (crawling using the arms and dragging the rest of the body along)!  And Daddy & I missed it!  Luckily Grandma saw it!  Sweet Pea spent the afternoon at Grandma's since the fever keeps coming back and so she can't go to daycare.  Her Infant Stimulation therapist was there playing with her and one of the cats was sitting near by.  She was laying on her tummy and crept forward to reach the cat.  (Long hair cat = great pulling toy).  They didn't really think much of it but then she did it a few more times.  Then once the therapist left my mom called me to tell me that she was combat crawling and she did it even more while she was on the phone with me.  I knew that she wouldn't perform for her daddy and I when we got her home and sure enough...she just laid there tonight.  Hopefully this weekend we can see it ourselves and even get some confirmation video for all of you guys!  This would be so wonderful if she combat crawls before her 11th month birthday!!!! 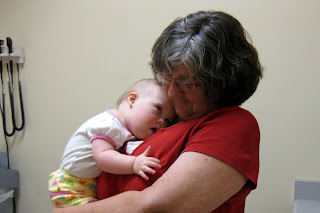 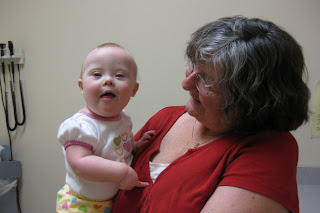 So back to our scare of the day...the O2 sats...94 is borderline where they would typically want to put the child on oxygen.  The nurse was even saying how she really might want to make her check into the hospital if her O2 sats really stay that low.  Luckily her coloring was really good and so it seemed clear that she wasn't in real trouble.  It is disturbing that the numbers were coming in so low, but 2 hours later they redid the test and the sats was up to 97 or 98.  They were much happier with that result so we don't know if it was just the original machine or if her sats are fluctuating that much.  We can hope it's the first.  Her lungs sounded clear and so the RSV (a contagious respiratory virus) that the nurse also feared wasn't a true worry either.  Yeah, that nurse really wasn't good for my nerves, but at least it ended ok.  We were allowed to leave, but they want us to check in with our pediatrician next week if her cold doesn't kick.

That's about it for today.  I hope tomorrow brings us a witnessing of the combat crawling!!!!
Posted by Sweet Pea's Mommy at 8:07 PM