Great Weekend For Fun and Learning!

I absolutely adore three day weekends!  We headed up to our local mountains to enjoy the time off and aside from a terrible night of sleeping, a few new teeth trying to come in and a lovely cold or newly found allergies, it was very nice.  Sweet Pea even learned a few new tricks!

A new sign - book: Although we have been trying to teach her some signs for months (like milk since she was 6 months old) she seems to only want to pick up ones that she wants to.  On Friday we discovered that she had learned book.  She picked up book after only being shown it about 20 times.  Her version is another approximation, but it is quite cute.  Instead of putting your hands together and opening them up she just claps her hands together one time.  Her regular clapping and more is very different.  The first time she did it I thought it was just a fluke, but then she did it a few more times and so I knew it was real.  I am again such a proud mommy!

So Big Game: On Sunday she learned to play So Big  You know the game, you say "how big are you" and she raises her hands up in the air and you say "Soooo Big".  We have tried to play this game for a few months and she enjoyed it, but we always had to lift her hands.  Not anymore!  Now she readily lifts her hands when you ask.  She doesn't lower them very well on her own, but that too will come.  Her giggles are priceless! 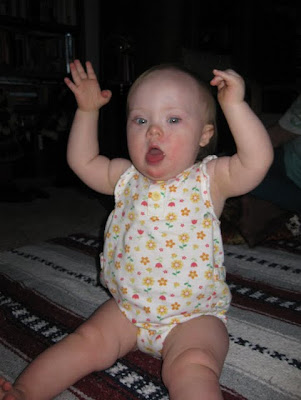 A new tooth: I saw one corner of her top right molar poking through the gums on Friday.  This is her fifth tooth and the second molar.  There are at least two other teeth trying to make an appearance as well so I hope that they do it swiftly and without much pain for the sake of my little girl.  Her sleep has definitely been impacted by these three teeth trying to come through!

Pull up on coffee table: Sweet Pea has been playing a new game all weekend where she holds onto our fingers and stands herself up (we don't pull her up) and then plops back down on her bum.  She does this over and over again and just cracks herself up!  I am surprised her bum isn't sore with how much she has done it this weekend.  Lots and lots of practice getting into standing and then she has also been having fun climbing over Mommy and Daddy too.  She has pulled herself up on toys and bins before, but she had never pulled herself up on the coffee table.  Up on her knees was the closest she had ever gotten...until this afternoon.  She knows when I'm pulling out the camera so this is as close as I got.  It's the action shot of her falling back on her bum after standing for a little bit.  Looks like Mommy needs to start cleaning off the coffee table of non-Sweet Pea approved items! 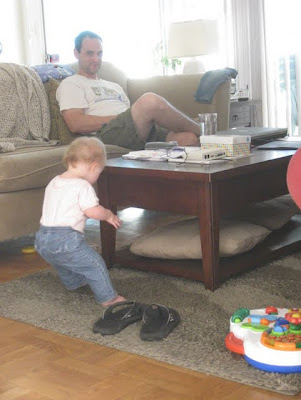 Today we also played in our backyard a little bit and she got to enjoy, for the first time ever, a slide that we've had for months and yet never played with it before.  Here is a video of her...don't worry, she wasn't hurt when she fell over at the end:

Apparently I was in a "let's try new things" mood because I also got out a tunnel that I purchased at a garage sale the other week that I hadn't tried out with Sweet Pea yet.  She looked at it with a "what the heck am I supposed to do with that" look so Mommy decided to try to show her how to climb through it.  While it looks big in these photos, it's not easy for a grown person to try to army crawl through...especially someone with a bit of a baby belly!  Luckily there wasn't anyone around to document that in photos!!!!  After I showed her what to do I put her in one end and she sat there for a little bit checking it out.  I put one of her favorite balls halfway down the tunnel and started calling her to come get it and sure enough she did! 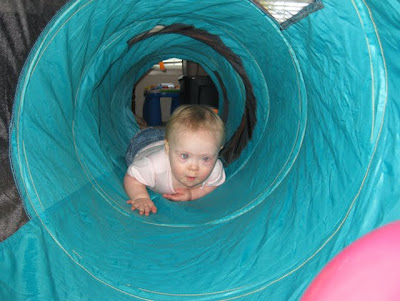 She makes it look so easy! 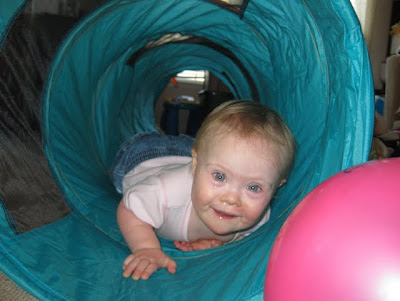 Here is a long video (about 2 minutes) that I shot today of her just being her.  It gives you an idea of how animated she is these days, but she actually stayed relatively still for the video which was surprising!  (Don't worry, we don't let her play with the ribbon by herself and I love how she uses her feet so often to help hold objects in her lap)

I'll post about our hike and BBQ another day soon!  It was a fun trip and I'm sad to be back home!  Work isn't nearly as much fun as playing with my little Sweet Pea!
Posted by Sweet Pea's Mommy at 9:05 PM