2 for 1: Climbing onto Couch and Soccer

Climbing onto Couch:  I started teaching Sweet Pea how to climb onto the couch on Thursday and it was going pretty well.  We took the cushion off because otherwise it was much too tall for her and then I had to really help her by lifting her leg up and then providing a place for her to push off on.  I was pleased with the progress we had made in the few minutes we worked on it, but figured we were a long way from her being able to do it on her own.  When I brought her home from daycare on Friday I tried again.  This time she basically did it on her own after the first try!  Here is a video:

Don't worry, she was okay, just startled.  Obviously, we still need to work on her learning to move further onto the couch before trying to sit, but this is a good start.  The other piece that we need to work on is her getting down.  If I tell her to come down she turns towards the edge and attempts to go off head first.  I turn her around and place her on her belly and she protests for a quick second and then wiggles backwards until her toes touch the ground.  She definitely has the idea of how to get down, she would just prefer to go head first like the maniac that she is.  Not surprising after all the table and bed and swimming pool diving that she does.  Falls are fun for her!  It's going to be a long couple of years for us!

Soccer: No, Sweet Pea isn't playing soccer...yet.  However, she did go watch her oldest cousin play on Saturday.  Cousin O even scored a goal!!!!  We set out a quilt for her to play on and she was happy crawling around on it and getting to the edges to explore the grass, but then would go back into the center.  Eventually her youngest cousin came over and she decided that if he was sitting on the grass that she could too!  So they played...or maybe it would be better said as this...she took his ball. Cousin C was very nice about it though: 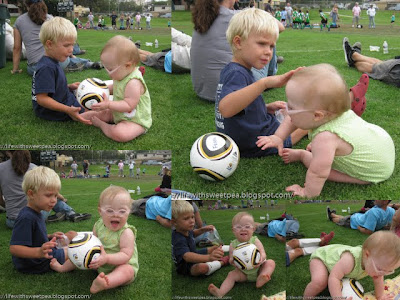 Then Sweet Pea decided that his shoes were enthralling.  Sweet Pea adores shoes, anyone's shoes!  They are one of her favorite toys.  Poor girl doesn't have any of her own so she thinks she really is neglected.  After trying to steal his shoes they decided to play ball together.  I love that she will stand up on her legs to reach for the ball!  Cousin C wants to know if she is ever going to roll it back to him though.  I think he is used to a faster pace game than Sweet pea is. 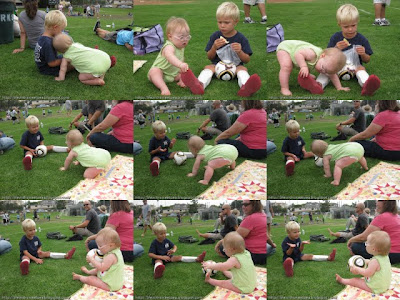