Sweet Pea's ear tubes surgery was a success today!  The ENT was even able to get the next size of tube placed so hopefully these will last longer than the previous two sets.  It's amazing to see how small her ears are!  I never really noticed it until I was looking at Angel's ears and you can very easily see the size difference.  I think Angel's at 5 months of age are already bigger than Sweet Pea's at 2+ years of age!  Insane!

We arrived at 5:30 and as we were checking in we were told that Angel wasn't going to be allowed on the surgery floor.  She was healthy, but they don't allow anyone under 16 up there supposedly.  It sure would have been nice for someone to tell us this prior to today!  I had both kids with me during all the pre op meetings...you would have thought someone should have told me that I would need to make plans for Angel!  Nope!  Luckily it was okay since we had Grandma to stay with Angel. 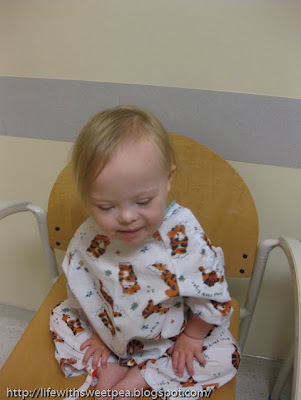 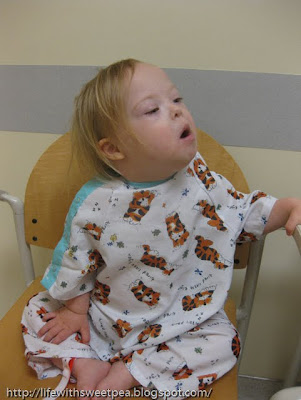 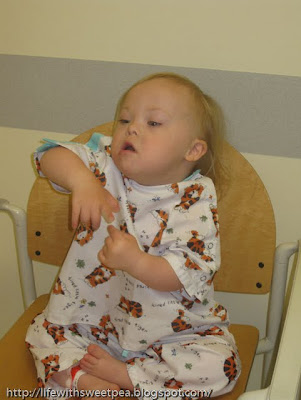 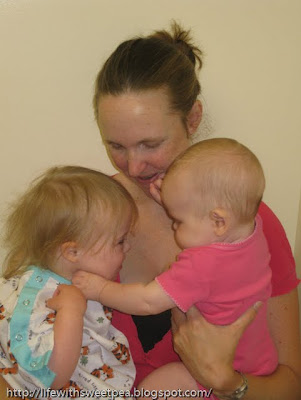 Sweet Pea has sometimes had a hard time waking up from the anesthesia.  I could hear her crying when she was just starting to wake up and they finally brought me back to comfort her and as soon as I was holding her she settled right down and crashed out for over an hour.  She was out cold!  The nurse seemed to be wanting her to wake up so that we could get out of there, but I wasn't going to force her awake before she was ready.  The few times that we tried a little she flailed around just enough to make me not want to continue.  When she finally did wake up she was quiet and a little out of it, but that was so much better than prior times when she would cry for so long.  I could easily handle snuggling with her for an hour!  Trying to hold an inconsolable girl is not nearly as easy.

Thank you for all the good thoughts!
Posted by Sweet Pea's Mommy at 5:34 PM