Can it really be?  I don't believe it is true, but supposedly Angel turned 6 months old today!  Where did the time go? 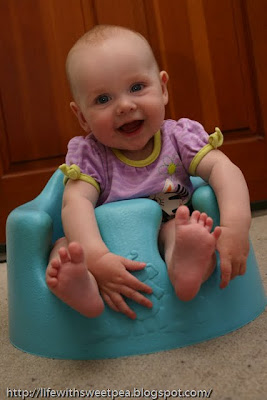 Angel is still more of a newborn than a toddler, but she is fast approaching the tipping point.  Here is a quick summary of what she is up to these days: 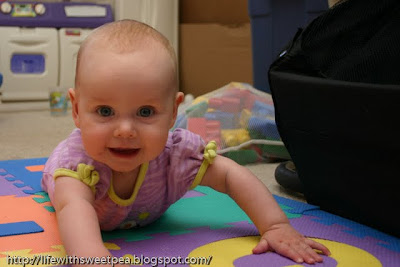 
Sleeping: We put her down around 7pm and she tends to fall asleep around 7:30pm with some help from us.  She used to fall asleep on her own, but that isn't happening very much anymore.  As for her waking up...it depends on Sweet Pea.  We moved her into the same room as Sweet Pea on the 17th and I wish I could say it was going well, but it isn't.  The past two nights Sweet Pea has gotten up before 5am and so I finally resorted to putting her in the pack n play in our sunroom so that we could get a little more sleep and so she wouldn't wake up Angel.  Angel was quiet until after 6:30.  The days before she would be up at 5:30 with Sweet Pea.  They are both light sleepers and I wish I knew how to change that!  Naps aren't going well these days at all.  She is taking 3 a day, but they aren't consistent.  Angel falls asleep easily in the car, but as soon as we stop she wakes up so it makes getting a solid nap in difficult when we have to pick Sweet Pea up from school.  She also isn't sleeping for more than 30-45 minutes when she naps at home anymore.  She used to sleep for a good two hours!  I miss those days and hope to bring them back, but I don't know how.  I know she would do better if she had a consistent routine and was at home for most of her naps, but I've been working really hard at getting Sweet Pea out to the pool and play dates so Angel has had to adapt.  All things considered, she is doing pretty darn well. 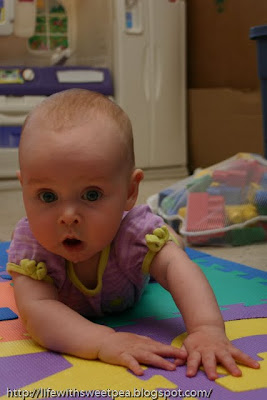 Eating:  Angel is exclusively breastfed for her liquids although she can take a bottle so Mommy can be MIA when necessary.  She started rice cereal on July 10th and loved it immediately!  She is hilarious when she eats...maybe a little frustrating at times, but it really is funny...if you don't get the next bite to her fast enough she starts grunting impatiently.  By fast enough I mean that as soon as you take the spoon out of her mouth she is almost immediately ready for the next bite.  I think it is safe to say that she loves rice cereal!  Since she handled the cereal so well I decided to try sweet potatoes a week later.  The first bite I gave her was at the end of a feeding of cereal where she was pretty much full already.  The look on her face was funny because she was confused, but not upset.  She took another bite and then was done.  The next day she ate a good 1/3 of the jar.  Angel has also had peas and just today she had pears.  She ate the whole container in one sitting today!  Her technique is definitely improving and I'm hoping she continues liking everything we give her! 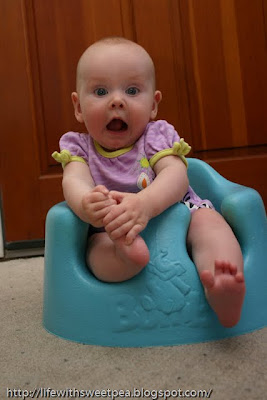 Gross Motor:  Angel rolled from her back to her stomach regularly before she was 4 months old, but she just started regularly rolling from her stomach to her back two weeks ago.  She tolerates being on her tummy much longer these days, but still doesn't prefer it...although you wouldn't know it since she is always rolling onto her tummy!  She is starting to bring her knees up under her belly and spins all around.  Her movements aren't very controlled yet, but she is making progress every day.  She still spits up every time we put her into sitting, but she is able to sit unsupported for a few seconds. 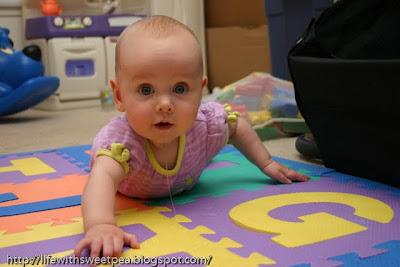 Teeth:  Her first tooth (bottom left front) broke through on the 23rd and it looks like she is about to get the other bottom front tooth.  I'm hoping we don't get two in one week, but I do believe we might! 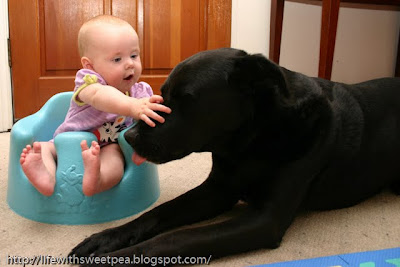 Favorites:  Her sister, baths, her thumb, her toes, singing and "flying" through the air. 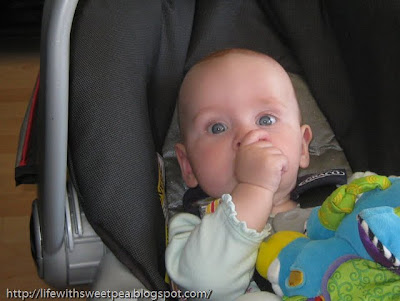 Personality:  She is very alert and aware of everything.  She rarely blinks as I believe she is afraid she will miss something.  Angel is easy going for the most part, but is picky about who holds her.  She will stare at a person for a little while before she either cries or breaks into a smile.  I often wonder what is going through her head! 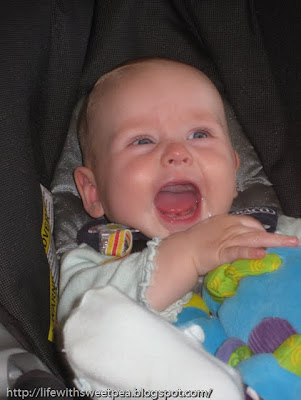 Hair:  Her hair is starting to come in and it looks like we might have a blond toddler eventually.  Her dark baby hair is slowly being replaced and the bald spot on the back of her head is just barely starting to get some new hairs. 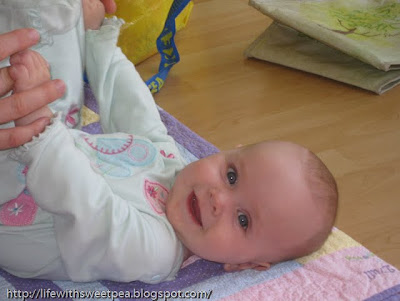 Happy Birthday Angel! We love you more than words can say.  Your bright blue eyes and sparkling smile make every day a wonderful day.  I can't wait to see what you do next!
Posted by Sweet Pea's Mommy at 10:48 PM