And I do really mean WE did it. I may be selfish, but the sedation process for the MRI really was hard on Daddy and Mommy too! She was a trooper through it all and only cried for about 30 minutes as she was coming out of it. She has been great since a little after 1pm. We have to keep an eye on her, but they really don't expect anything at this point. We are home and Daddy is trying to catch a nap while Sweet Pea and I eat and play a bit. She hadn't had any food since 3:30am so I'm surprised that she is not hungrier, but we are going to feed her every couple of hours since she isn't so good at telling us when she is hungry. Or if she is good, we are bad at reading her signs.

So here is what the process looked like for us today. We got the call from the nurse last night informing us that they had changed their policies and now she could have breast milk until 5:30am and formula until 3:30am. We decided that since we have been told that her stomach is slow to clear we better be cautious and give her breast milk at 3am. Daddy was nice to Mommy again and woke up at 3am and fed Sweet Pea a bottle of breast milk and she downed the whole thing. Good thing too since that was the last time she ate until 2:30pm!

Of course the day she decides to sleep in is the day that we have to leave the house at 7:15am! She woke up about 6:45am and we hit the road to the hospital at 7:15am. We checked in a little before 8:30am and were taken into the initial prep area around 8:45am. Sweet Pea was weighed and her vitals were taken. We changed her into a lovely hospital gown and put her in a fresh diaper. Then we went into the real prep area where they couldn't figure out if she was only getting gas or IV sedation also. They were waiting for the anesthesiologist to finish with another patient to come let them know since the nurses heard different things.  This didn't instill a lot of confidence in us! We tried to pass the time by taking a few pictures and Sweet Pea is turning into quite the ham for the camera! 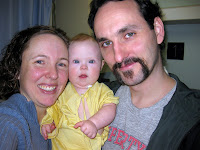 Anyway, they ended up just giving her gas which supposedly is easier on them. We waited and waited in that prep area and finally just before 10am they took Mommy and Sweet Pea into the MRI room and put the mask on her and within 20 - 30 seconds, she was out. I didn't think it would be hard to watch, but she was fighting them as they were trying to keep the mask on her mouth and at the same time attaching all the vitals. My eyes watered, but I held it together. I kissed her right before she was out and then I had to leave.

Daddy and I spent the next 2 3/4 hours just waiting for the pager (like they give you in restaurants when there is a waiting list to be seated) to start blinking its lights. The first 2 hours went pretty fast, but the last 45 minutes dragged on and on...especially once the 2 1/2 hour mark had come and gone. That was the time that they had told us it would take. So when the magic pager started flashing its lights, we quickly went to the recovery area and there was Sweet Pea still pretty much asleep. She wasn't crying too much yet, but that quickly changed. We picked her up and tried to console her for the next 30 minutes without a ton of success, but I'm sure that what we were doing was better than just letting her be. The poor girl was having a hard time coming out of it, but once she finally did, she started looking around and staring at her hands like she was on drugs. It was cute and we were just glad to have her back in the almost real world. We got her dressed and were able to leave a little after 1:30pm. Not too bad! 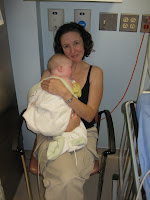 Thank you to everyone for your positive thoughts in helping us get this darn MRI over and done with. Now the waiting game begins. The radiologist will have his/her notes in the system by tonight so our cardiologist should get the results tomorrow, but since our appointment isn't until the 19th, I don't expect to hear anything until our appointment. Our ENT and GI will also be looking at the results and we see them on the 11th so hopefully we will at least get a glimpse into what the results are from them. I'm not sure though since it isn't their area of specialty. Let's hope though because this mommy loves to drive herself insane with worry!

That is about all the news we have for the day. I hope everyone is having a good day!  Hopefully Sweet Pea lets Mommy get a nap too! Yes, I couldn't sleep very well because I was worried about today. So glad it is all over and it wasn't bad at all!