Today Sweet Pea went to Children's Hospital to have a stomach emptying scan done.  The GI (and we) believe that her stomach probably doesn't move food as quickly as it should.  This is what causes her to spit up hours after eating and the food is still fully recognizable.  So this test was just to confirm that and see how bad the situation is.  We won't know the results for 2 weeks when we go in to see the GI, but Sweet Pea gets an A+++ for her performance today!  She woke up at 5:15 which wasn't a good start.  She was in a great mood already as she was kneeling at the side of her crib waiting for me to come back in the room.  I got her back to sleep by her sitting in my lap in the rocking chair until about 6:30.  We were on the road at 7:30 to pick up Grandma and head up to the hospital.  We are so lucky that Grandma is retired and so willing to give up so much of her time for her little granddaughter!  Grandma was a necessity today because to do the study they have Sweet Pea ingest radioactive stuff and I couldn't be anywhere near it or her.  We get to the hospital, check in and play in the waiting room for a few minutes.  Sweet Pea will not sit still anymore.  She was bouncing back and forth between me and Grandma, but happy the entire time.  We were called back about 8:45 and the nurse explained the procedure, I helped get the food setup (without the radioactive part) because they were going to take a portion of the food and put the radioactive stuff in it and have her eat that first.  Then if she is still hungry and willing to eat then they would give her more food without anything radioactive added.  She had 10 minutes to eat whatever she would and then they were going to strap her down and take pictures of her stomach for the next 90+ minutes.  I kiss Sweet Pea goodbye and wish Grandma luck and leave.  Yes, leaving was hard, but I knew that she was in great hands.  I hang outside the room and can hear a little when I put my ear up to the door...I'm sure I looked funny to anyone walking past, but I didn't care.  The feeding is going well and since she hadn't eaten since 10pm I wasn't really surprised.  The fact that she wasn't fussing at all since she had gotten up was surprising as heck, but a welcome surprise.  When they finished the food Grandma kept her upright for as long as they would let her and then put her down on the bed and began the process of strapping her in.  They don't mess around with this part!  Sweet Pea wasn't going anywhere as you will see below.  She handled being restrained like a champ and with a little singing from Grandma, Sweet Pea fell asleep.  That made the first hour of the procedure very easy for everyone involved.  I got a call from Grandma with an update and was able to peek my head in to see it for myself.  She was laying there straight as a board with even her head straight up when I saw her.  It was hilarious and yet sad at the same time!

Here she is sleeping with the big camera over her taking pictures: 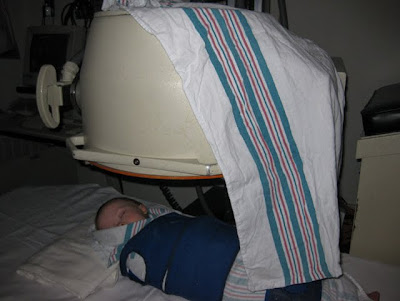 This is a wider shot to show the computer that was counting down the time remaining for the test and the right hand screen was where the stomach pictures were being seen.  It definitely wasn't easy to see what was going on, but Grandma said she could see things definitely going on in there. 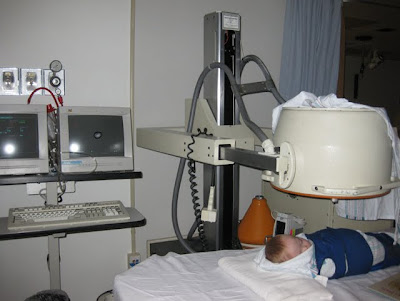 When there were about 30 minutes left in the test Sweet Pea woke up and so Grandma got to entertain her and keep her happy.  That isn't an easy task when she is free to do what she wants, much less when she is wrapped up tighter than a mummy!  Grandma did an excellent job though and I could hear Sweet Pea blowing raspberries and "talking" through the door.  Apparently she learned a bit about pop culture because Grandma had found an old People magazine in the room while she was sleeping.  She also had some finger play and songs sung and finally watched some Baby Einstein video.  She would look at Grandma with her big blue eyes that seemed to say, "What are you doing to me?" but didn't protest about it.  Amazing and I'm so glad that Grandma was able to be there with her to help her through the strange experience.

Here is a photo of her awake and wondering what is going on: 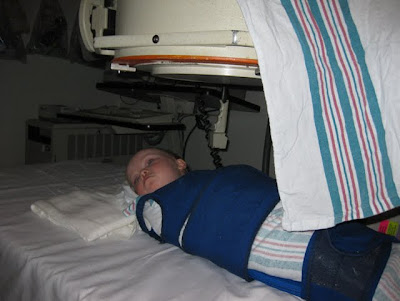 We will let you all know the results in two weeks after our visit to the GI.  We see the GI and ENT that same day so hopefully there won't be any major news to share, but we will share what there is to share.
Posted by Sweet Pea's Mommy at 7:51 PM