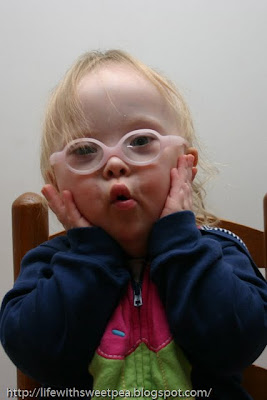 Following participating in a public rally
to oppose the California State Budget Cuts
to services for people with developmental disabilities,
Ryan told his mom...
"The bad guys are stealing the money,
we need Batman!"
Ryan Fitch
Age 8
Quote 2 of 21, March 2, 2011

"If they invented a pill to take away my Down syndrome, I wouldn't take it because this is the way God made me.  He wants me this way - and I don't want to mess around with God's plan"


Paul spoke in 2 word sentences, only a few times a day.
His summer vacation had included swimming with his Grandma.
When he saw her again, 4 months later he said...
"Oh Gumma, mimmin in da pool"
Not only did he say a full sentence, he displayed his long term memory skills since he only had the joy of seeing his Grandma
a couple of times in his short lifetime.
By: Paul Steward
Age 5

When Blair was 5 he was stuck on 2 word sentences.
His family  & therapist did everything they could to get him to use 3 words.
One morning he got up to find
the refrigerator restocked and exclaimed...
"Holy Shit, Yogurt!"
After this dad found out he heard those words while watching
SPACE BALLS with his older brother,
he explained "we don't talk like that at our house."
Blair went on his way and his parents celebrated the victory of 3 little words!
By: Blair Williamson
Now age 31, with plenty to say

Two brothers, at dinner, were asked what they were thankful for.
The typical little 5 year old said "God and Jesus."
His brother with Down syndrome said:
"Santa Claus"

Casey and his mom were shopping.  When they got to the cash register the clerk asked Casey "how are you?" Casey responded
"Great" and pointed to his mom and said "I'm her kid."
The clerk repeated to make sure she understood,
"You're her son"
and Casey replied
"Oh, she knows!"

Angela was trying to tell her father something.
He wasn't getting it, and asked her to repeat slower, twice.
Finally, in frustration, Angela shook her finger at her father and said:
"DAD CONCENTRATE"

Jessi's mom was on her way inside a business,
Jessi asked if she could wait in the car,
mom told her sure, as long as they could see each other.
Jessi informed her mom:
"I'm almost 18 you know!"

By: Jessi Rendleman
age 17 of course!

Jon's mommy set him up with an activity and told him she would be
doing the dishes and to call if he needed her.  Jon replied:
"One more thing 'fore you go... big cheer for Mommy.  GO MOMMY! GO MOMMY!"

Jason wrote his mom a Valentine Card that read:
"Roses are Red
Violets are Blue
Sugar is Sweet
And so do You."

Amanda & Jon have dated since high school.  In passing, Amanda's mom mentioned that Jon had Down syndrome.  With a surprised look on her face, Amanda said:
"He does?" taking a moment...
"That's cool."

Kayla was 10 when she attended a funeral with her mother.
She wanted to go with her mom to pay her respects at the open casket.  After saying a prayer she asked her mother:
"What happened to her legs?"

Jessica's mom asked her, and her 4 brothers, what they wanted to be when they grew up.  The boys answered "An engineer, an artist, a marine biologist, a waiter."  Jessica put her finger to her chin and thought... then with a big smile, she rose her arms high above her head and said:
"BIG!"

Casey's program was closed in observation of a Jewish Holiday.
His step dad said "But Casey, your not Jewish."
Casey responded:
"Well... I am now!"

When Ibby doesn't want to do something his response is:
"I CAN'T like that!"

Watching her Grandmother's coffin lowered into the ground,
Amanda whispered to her mother:
"Happy Trails"

Blair and his mom were seeing a chiropractor,
his mom was referred for a massage.
When she arrived she was told the usual message therapist was not in but
her appointments were being filled by a visiting Tibetan Monk.
When she told the story to friends, often in front of Blair,
she was teased that after the Tibetan Monk
she surely would never want "just any" massage therapist to treat her.
One day, on her way to the chiropractor
she asked Blair if he wanted to go,
but explained she was getting a message
so the appointment might be a little long.  Blair responded:
"Yes I want to go, I want to see the monkey that has been giving you massages"