Yet again I've been neglectful of this blog.  Things have been a little busy around here and yet we haven't really done much.  Seems that having two kids can have that effect on us!  I'll try to catch you up...

ENT appointment on 4/12: Sweet Pea came through with flying colors!  Her tubes are still in even though the doctor thought they wouldn't last three months when he put them in back in November.

Toilet Training and Behavior Class:  I started attending two trainings at our local regional center.  The toilet training class was only two sessions and today was the last day of it.  It was fairly informative and since I haven't read any books on the topic, I found it useful.  We have started working on potty training very informally in this house.  Sweet Pea makes it quite obvious normally when she is going poop and so we have been able to put her on the potty a number of times.  She does her job very quickly and we get all excited and move on with our day.  We will see how we progress, but I'm not in any rush.  The other class is managing behavior and I've attended one class so far.  It was pretty interesting and I think I'll learn a lot.  We aren't having too many behavior issues right now, but I like to be proactive.  The class focuses on not rewarding the behaviors that you are trying to extinguish and I think Daddy will have the hardest time with that piece of the puzzle.  Sweet Pea definitely treats Daddy differently than Mommy and I'm guessing it's because he is the nice one.

Hearing Test on 4/27: Sweet Pea had a hearing test yesterday and the results were not what we were hoping for.  The otoacoustic emissions test for both ears showed that her tubes might be blocked.  They didn't know if it was because of fluid in the ears or some other reason.  Then they moved on to the test where they try to see if she responds to different sounds in the room.  Not the most accurate test, but it's what they do apparently.  Here is what the report says..."Minimal response levels fall within the mild to moderate loss (35-55 dBHL) range; however, these responses provide limited information about hearing sensitivity.  Tympanometry revealed normal ear canal volumes in both ears despite the presence of PE tubes.  DPOAEs (I think that is what it says) were present in the right ear and absent in the left ear."  They want us to follow up with the ENT and then retest once we get whatever issue is causing the tests to fail, resolved.  So, even though we were just at the ENT, it looks like we will be heading back there sometime soon.

Opthamologist on 4/15: If you thought the hearing results weren't great, well this appointment was even worse.  We were completely unprepared for what we were told and so we really don't have a lot of details to share.  Basically, he is recommending two different surgeries.
We are going to go see another ophthalmologist to get a second opinion as we certainly don't take eye surgery lightly.  We understand that many kids have had to do one of these surgeries, but we also have heard that many kids have to have both types of surgery done a couple of times to get things right.  We don't have enough of an understanding on what they are wanting to do and the reasons behind it.  Our doctor was very nice, but we didn't even know what to be asking at the time.  We will definitely need to setup another appointment with him before we make any decisions at all.

If you have any opinions or information to share on either the hearing/ENT front or the Ophthalmologist front, please share it!

To end on a happier note...here is Sweet Pea's new trike

.  It's a hand-me-down from her cousins and is the only trike that fits her right now.  She has another great tricycle that her Grandmother gave her, but we have to wait a while for it to fit.  I see some fun times coming this summer with this little trike! 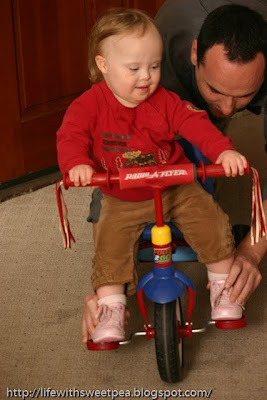