These are Happy Days

Life is good here.  The girls are both healthy and happy which is a nice change.

Angel is climbing onto everything so I'm sure the bumps and bruises are going to multiply for a while.  She doesn't just climb, she conquers!  Angel has zero interest in walking, but she sure does enjoy this new found freedom of climbing. 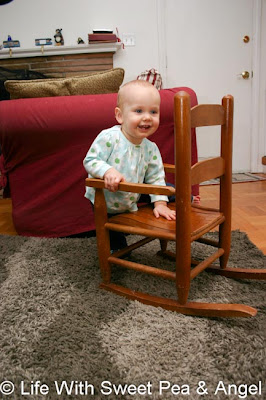 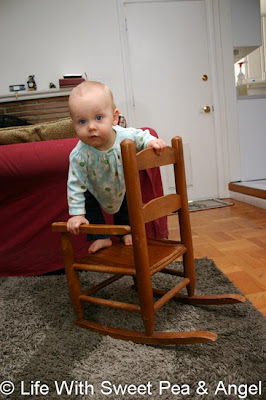 Sweet Pea is starting to be so much more independent!  She will often completely feed herself with her spoon or fork and not require us to even load the utensil with the food.  We used to have to load it and feed her so this is a huge step for us.

She also self entertains for a much longer period of time now.  The only issue is that she HATES when her sister tries to join her in some of her playing.  Sometimes they play great together (parallel more than together), but other times...not so much.  Little sisters sure can be pesky. :-)  (I'm a little sister so I can say that.)

And she is walking without fighting so much more!  We walked to the park on Saturday with Aunt R & Uncle R and she walked the entire way there without one complaint.  It is only 3 blocks, but for her that is HUGE!  On the way home it was a little more challenging, but I only had to use one goldfish cracker as motivation to keep walking which is unheard of.  She was asking for Signing Time about a block from the park but clearly we didn't bring a tv with us to the park so she had to walk home to watch an episode while I cooked dinner.  Silly little Signing Time addict... 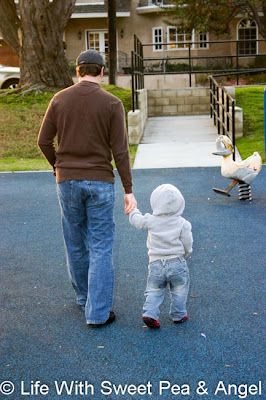 On the walking and behavior front...I was able to take both kids to Trader Joe's this morning without wanting to pull my hair out after just a few minutes.  The trip took about 40 minutes in total and Sweet Pea was great during it!  Angel sat in the cart and Sweet Pea walked through the aisles with me.  She would help me pick out food to put in the cart and she only touched three items that she shouldn't have.  We used to have issues often even in the parking lot before getting into the store!  Getting through the entire shopping trip without one fit is a dream come true.  We got a little help from an employee when she gave her stickers for being so cute, but still...Sweet Pea did it!  I am so proud of her!!!!

Back to the park...both girls enjoyed the trip.  Sweet Pea showed off her climbing skills and her lack of fear of the big winding covered slide immediately. 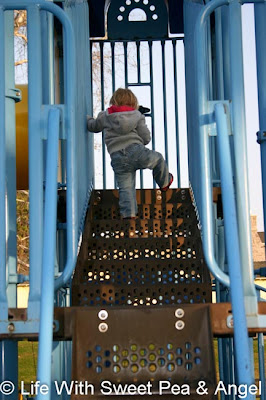 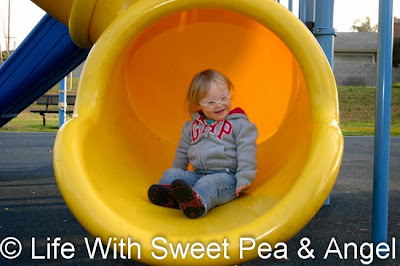 Angel decided that going down slides on her bottom was for novices.  She much prefers this new method: 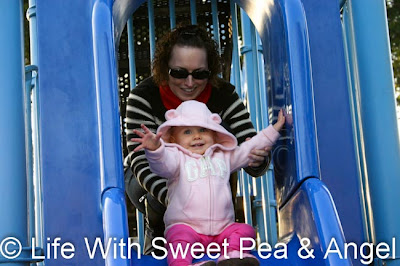 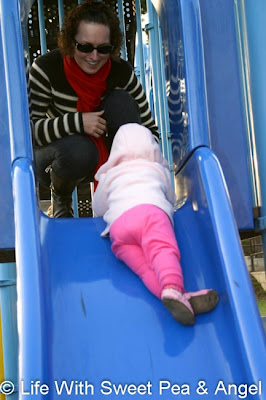 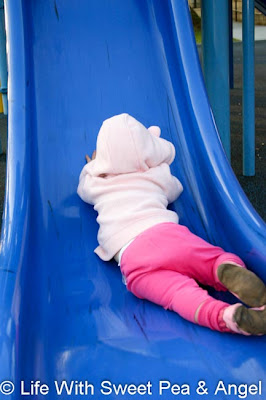 Angel was having a blast on the rocking animals with a little assistance from Auntie R. 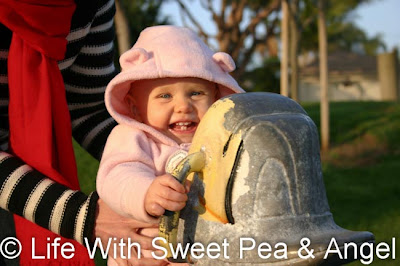 This doesn't fit with this post, but seeing as I don't do many posts I better include it while I'm here...Completely random, but it's so strange that I have to write it...Angel has a few different toys in her crib that she has two different versions of the same basic thing (often because one was Sweet Pea's but she never played with them)...two pink my first dolls, two Tiggers, two chewy blanket things, etc.  The other day I walk into her room after a nap and find that all 6 of these items on the floor.  Not a big deal.  She tosses her toys out all the time.  Daddy says she is interrogating them and if they don't talk, they are goners.  Anyway, the toys on the floor wasn't the interesting part.  The fact that these toys were paired up...even on the floor was!  She had dropped them in such a manner that you had the 2 dolls right on top of each other, then the two Tiggers next to that and about a foot away the 2 chewy blanket things.  It was very odd.  I should have taken a picture, but didn't think of it at the time.  On Friday when I saw her manhandling her two Tiggers again I had to get a picture of that.  She has both of her poor Tiggers by the tail and is loving every minute of it.  And yes, I love it even more because of the twist on "Tiger by the Tail". 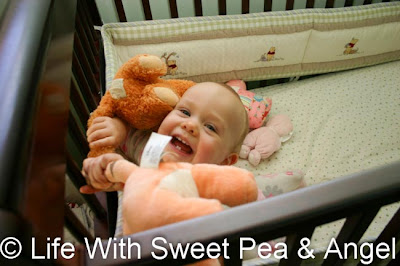