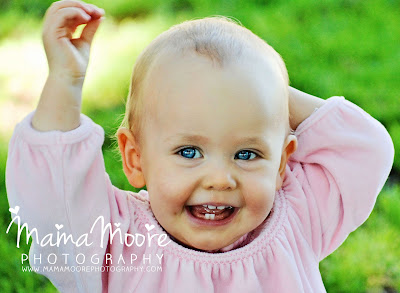 Angel is 1 year old today!  Really?!?  How can that possibly be?  My sweet little baby girl is growing up so fast and I feel like I’ve forgotten so much already.  I’ve been so busy with the two girls that my blogging has taken a back seat for many months and unfortunately that is how I capture most of my memories and so I’ve missed them.  I’ll try to capture some of what Angel is doing currently, but it changes so fast that I can’t keep up.
Language:
After spending a few weeks or more likely it was a couple of months FREAKING out about her lack of speech…and I mean absolute, complete lack…we now have a motor mouth on our hands.  This little girl talks and talks and talks and I have hardly any idea what she is saying, but she is saying a lot!  She has quite a few words that I can understand and she mimics a lot of words too.  Here is a partial list of the words she says currently: hi, shoes, bye, ball, dog, outside, down, Elmo, milk, more, o (Cheerios), push, all done (which she says in the sweetest little voice that melts Mommy’s heart) and probably more that I can't think of since we haven't been writing them down. And she signs more, milk, all done, ball and potty which clearly means we have spent WAY too much time taking Sweet Pea to the potty.  And yes, Mammy and Daddy are missing from this list…eventually I’ll hear those sweet words I’m sure.

Here is a little video of her saying "all done":

And here is one of her saying "outside":

Eating:
Angel is still a champion eater although she is getting pickier with time.  She definitely prefers table foods over baby food.  Banana might be her all time favorite food right now, but that is only because she hasn’t had her cake yet.  I’m sure she will go crazy for that tonight!  Her other favorite foods are Cheerios, Goldfish, and avocado…but not guacamole.
Walking:
She has ZERO interest in walking.  She crawls super fast and she often pants like a dog as she is crawling which makes us crack up.  She can walk with a fair amount of wobble holding onto one hand.  She will sometimes take two steps by herself to get to something.  That something is most certainly not Mom, Dad, Sweet Pea or Grandma!  Oh no…we are not nearly enough motivation.  A puppet however is!  She has a nickname that starts with Silly ____ for a reason.  She also doesn’t have any interest in walking with walkers.  We stand her up at the handle and she holds onto them and walks around to the side or front of them to play with whatever is there.  Oh well…she will certainly walk when she is ready and I’m sure I’ll regret ever teaching her at all!

Here is a video of her trying to leave our house and then showing off her walker skills: 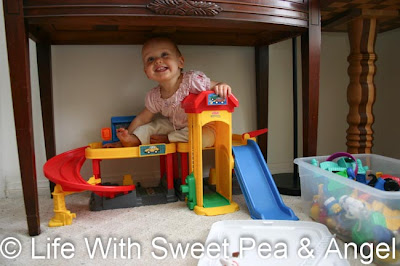 Climbing:
She is definitely a climber.  She used Sweet Pea’s lap desk the other day to climb onto the couch.  On Tuesday I left her alone at NAPA Center while I washed out a dish and I came back to find her on top of the therapy staircase (it’s only a couple steps up so it wasn’t as bad as it sounds).  She wasn’t even in the vicinity of that staircase when I left!  At Sweet Pea’s other therapy locations Angel is always climbing into the chairs.  I think she wants to participate in the therapy since she always sees her sister doing it.  She did join in at Sweet Pea’s center based therapy program last week for a short bit and it was cute to watch her sitting at the table with the other kids. 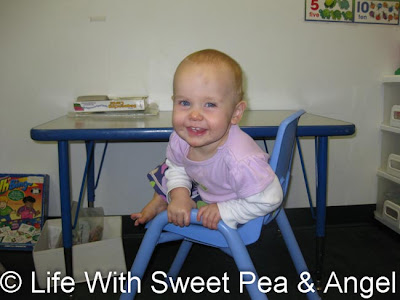 Games/Songs:
Angel enjoys the itsy bitsy spider and twinkle twinkle, but doesn’t do the hand motions yet.  She plays peekaboo all the time.  She pretends to be bashful around people and gives them her cutest smile and then turns her head away.  Angel doesn’t really have any favorite toys…except for whatever her sister is playing with and also whatever she can carry in her mouth as she crawls around…which contributes to her looking like a dog in addition to sounding like one (maybe she is spending too much time with Kodi).

And one last video of her enjoying her penguin punching bag:

Teeth:
She still has the same 6 teeth that she had by the time she was 8 months old.  Don’t think anything is coming in soon either, but who knows.
Sleep:
She takes two naps a day on most days.  The naps can go anywhere from 20 minutes (oh how I hate those) to 2 hours (heaven!), but typically are in the area of 45 minutes.  Her ability to sleep through the night fluctuates greatly…some weeks are good…others not so much.  She seems to require crying to fall asleep and that is not a characteristic that I hope stays, especially since she shares a room with her sister.
Angelisms:
Bottom line is that we love Angel with all our hearts and we can't imagine life without her.  This first year has been wonderful and I just know that this next year is going to be even better.