I had an ultrasound Thursday morning to get an estimation of the size of this little girl.  My OB has been nervous about her size for a number of weeks now because I've been measuring well ahead of where I should be.  She wanted to make sure that the belly was smaller than the head to help ensure that she won't end up with shoulder dystocia.  Shoulder dystocia is where the shoulders don't/won't come out after the head is out.  It could be as minor as just needing to do a few maneuvers of the baby to get her out, could mean a broken clavicle, and all sorts of things that increase in severity up to cerebral palsy or death.  Obviously the severe end of the spectrum doesn't happen often, but it is an outcome that the OB's have to consider.

The ultrasound estimated that she was just under 9lbs currently and the average growth at this point is 1/2 lb a week.  The head circumference was estimated to be 35.25 cm and the abdominal circumference was 36.43.  The head equates to an average baby at 41 weeks 1 day gestational age and the abdomen equates to 40 weeks 3 days.  There is no way for them to measure the shoulders because of how they are cramped into the uterus so they have determined that there is a correlation between shoulders and abdomen.  Since her head is smaller than her belly, the ultrasound doctor (same group that did my CVS) recommended a c-section.  He seemed quite blown away by her size.  He kept looking at her chubby cheeks and saying that she was remarkable and impressive.  Those really aren't words you want to be hearing in that situation and in the manner that he was saying them!  My OB knows that I want to do everything to avoid a c-section and so they compromised and agreed to the following plan of action.

Monday morning (1/24) I will go in for an amniocentesis with the ultrasound doctor.  The purpose of this test at this point in the pregnancy is to determine if the lungs are mature and ready for the world outside of the womb.  The results are available by 4pm that day.

If the results from the amnio show that the baby is ready for the real world then I will be heading into the hospital at 2am on Tuesday morning to begin the induction.  The induction could take anywhere from just a few hours to over 24 hours.  They will probably start by giving me something to help soften the cervix and that is supposed to take 6 hours to work and then they will put me on pitocin which should start the contractions which work to dilate the cervix and work the baby out.

If all goes well, I should have the baby sometime on the 25th or 26th at the latest.  Please think positive thoughts for us all!

This has been extremely emotional for me as I wanted to do things as naturally as possible.  I'm coming to terms with what has to happen and trying not to second guess the doctors too much.  The biggest shock is probably that I went from having almost 3 weeks to having only 4 days to get everything ready!  Yikes!  My sister was a HUGE help this afternoon and we got a lot crossed off my to do list.  Now I want to focus a lot of my time and energy on Sweet Pea and cherish every last minute that I have with her while it is just us.  All too soon her world is going to be turned upside down when her little sister joins us and she is no longer the center of the universe.  This will also be my first time spending a night away from her and I know that it will be more than just one night that I'm not home for.  She will be going to Grandma's on Monday evening so that we don't have to transfer her at 1am so I won't be with her Monday and definitely Tuesday and who knows about Wednesday.  I'll be able to see her for a little while on Tuesday and hopefully on Wednesday too, but the hospital isn't close so I don't really know if that will work out or not.  Hopefully she behaves and doesn't have too hard of a time being away from us.  Grandma takes care of her a lot so that will definitely help make it easier on her.

People keep asking if Sweet Pea knows what is coming and I have to admit that I probably should have tried harder to prepare her for this, but the baby in the belly thing seems so abstract that I really don't think she would have gotten it.  We have definitely talked about her sister coming and a baby coming, but until she is really here I don't think Sweet Pea will understand what that means for her.  She is going to be an amazing big sister...eventually.  I can't wait to see what she does when she first meets her!  So many fun memories are about to be made!  I need to think about all of those instead of how sad I am that my time alone with Sweet Pea is coming to an end.

So that is the news on our end of the world.  Here are a couple of photos from the ultrasound on Thursday. 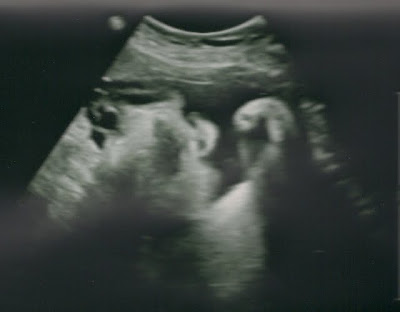 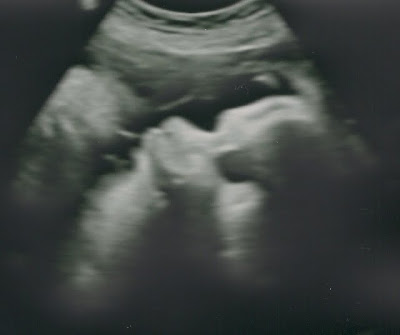 I can't wait to meet her!  Now we just have to decide on a name for the little girl!
Posted by Sweet Pea's Mommy at 8:29 PM