Today was our trial of a therapeutic riding facility not too terribly far from us.  I've heard about the wondrous things that horses can do and was hopeful, but cautiously optimistic as Sweet Pea has NOT been a fan of horses (or ponies) recently.  A friend had recommended the facility, Dream Catcher of LA, and their fees were somewhat reasonable since it's only therapeutic riding and not full hippotherapy.  Our lesson was this afternoon at 3:30 so we left in what should have been plenty of time...except that it was Friday afternoon and even worse it was the Friday before Christmas and even worse...I took a wrong turn because Google Maps didn't give clear directions.  Oh well...turned out to be okay as Sweet Pea got to sleep an extra 20+ minutes and they were running late so it all worked out.

When we arrived Sweet Pea wanted nothing to do with any horse and kept saying "all done horse".  Having a little free time to just sit and watch the horses, have a little snack and just hang out was by far the best thing we could have done.  By the time it was Sweet Pea's turn she was willing to have me carry her up to a horse.  I would put my hand out for the horse to smell and she would watch, but wouldn't do the same.  She wouldn't pet the horse or touch her in any way.  I just held her and talked about the horse.  One of the ladies brought over a helmet and so we made a game out of putting it on and that didn't work real well, but I think she finally forgot about the helmet.

We then took her over to a ramp and I carried her up it and then passed her to Joan, the owner of the facility, at which point Sweet Pea started freaking out.  She had clearly dealt with lots of fighting kids before because it didn't phase her one bit and she got her on the horse with ease even though Sweet Pea was struggling against it.  I walked down the ramp as soon as I passed her off and got out my camera to photograph whatever was about to occur.  I honestly was not expecting much success!  Here is the video that started recording about 10 seconds after she got on the horse: 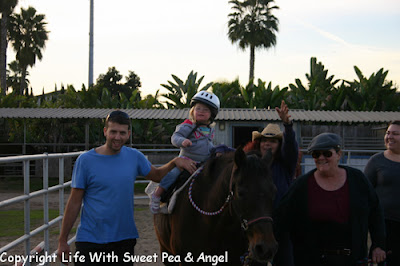 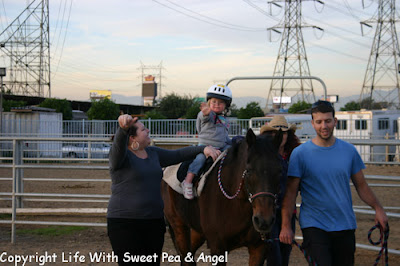 She looks so small on the big horse! 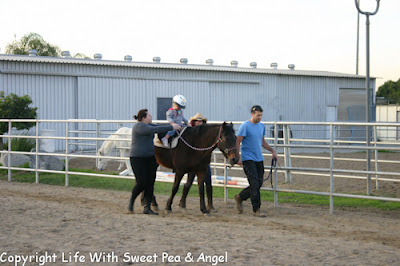 Having a good time! 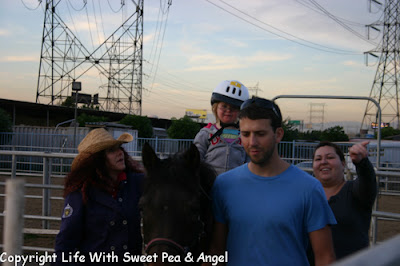 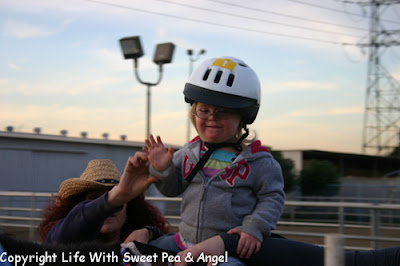 They walked her around for quite a while getting her more accustomed to the horse and I loved how they aren't really holding her directly.  The sidewalkers (amazingly that is what they call the people walking on the sides of the horse) hold the saddle and kind of trap her leg under their arm in the process.  I think that will make it much easier to move away more and more as she gets better (yes, that would be WAY down the line, but I always think way too far ahead).

This video is from just a couple of minutes into the session and you can see a marked improvement in her confidence on the horse.

Then they had her do a small amount of movement on the horse as you can see in the below video.  Joan was doing an evaluation of sorts on Sweet Pea to see what she could do and what kinds of activities would be best for her.  She had her put rings on a pole and you could see how unsure Sweet Pea was about leaning very far to reach the stick in the below video:

After they were done in the ring they went on a tour of the stables and Sweet Pea never once complained or whined at all.  The horse even tripped a little at one point and she just kept on going!  I was so proud of her!!!!!  It was amazing to see the change from when they first put her on the horse until they took her off about 20 minutes later.  I am excited to begin doing sessions regularly (or as regularly as finances will allow at least) as I know that this is going to help her in so many ways!  Here are a few that I am hoping might be impacted:
The Dream Catchers of LA website lists a bunch more, but those are my top reasons for wanting to try this and why I am so happy that I found a place that wasn't too far away and that is willing to work with Sweet Pea.  Many facilities won't work with children under 4 years old, but Joan doesn't buy into that and Sweet Pea will be 4 in just a few months anyway (hard to believe!!!!).  We are figuring out the schedule now, but hopefully we will be seeing horses a couple of times a month come January!
Posted by Sweet Pea's Mommy at 10:02 PM